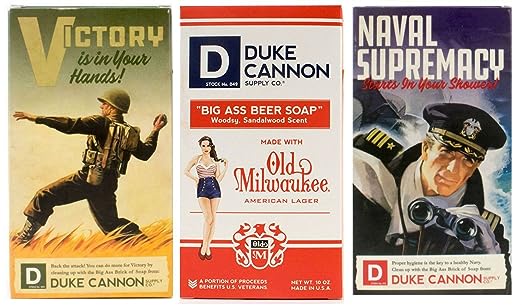 The Big Brick of Soap from Duke Cannon was modeled after the large bars used by GIs in the 40s and 50s. To honor the military heritage of our Big Ass Bricks of Soap, this particular soap comes in our limited edition WWII-Era boxes inspired by propaganda posters from WWII. // VICTORY: Our *Smells like Victory* green bar smells awesome (clean, fresh scent with a hint of grass). If you enjoy activities like drinking American beer or using power tools, then frankly, this is the only soap meant for you. // NAVAL: While other blue soaps are named “Ocean Force” or “Summer Mist” our blue soap is the only one big enough to be named “Naval Supremacy.” With a package sporting the official colors of the U.S. Navy, this superior grade product has a refreshing aquamarine, ocean scent, and has steel cut grains for maximum grip and exfoliation. // PIN-UP BEER: One day while sipping a refreshing shower beer, Duke Cannon got the idea: what if we put beer in the soap? Turns out there are actual skin benefits that come from the beer, but that’s just a nice side benefit of doing something awesome. So, we partnered with our friends at Old Milwaukee, purveyors of a quality domestic lager enjoyed by hard-working Americans since 1849. The result is a Big Ass Beer Soap that suds up well, gets you clean with a Woodsy, Sandalwood scent. // Like all Duke Cannon Big Ass Bricks of Soap, this brick weighs in at a hefty 10 oz. and lasts longer than the dainty soaps your mom uses. This superior grade soap product from Duke Cannon Supply Co. is designed to meet the high standards of hard working men who want to get clean and smell good without using feminine shower gels and accessories. // In appreciation of the men and women who have kicked butt serving our country, Duke Cannon Supply Company donates a portion of proceeds to veterans causes. // Cruelty Free. Our products are never tested on animals, just bad interns. Made in the USA.