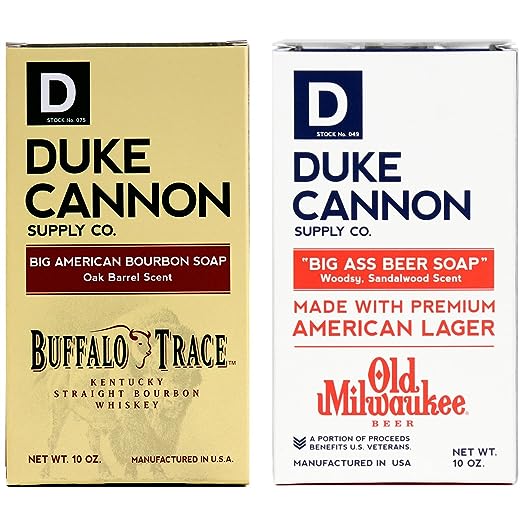 BIG AMERICAN BOURBON SOAP: In the early days of the American Frontier, rugged pioneers indulged with a dry buffalo steak and a pull of whiskey, not appletini and plate of bruschetta. Duke Cannon honors that independent, pioneering spirit by partnering with Buffalo Trace Distillery to add their award-winning Kentucky Straight Bourbon Whiskey to this Big American Bourbon Soap. Weighing in at a full 10 oz., this large, American-made soap has a rich, oak barrel scent that smells as good as bourbon tastes./// BIG ASS BEER SOAP: One day while sipping a refreshing shower beer, Duke Cannon got the idea: what if we put beer in the soap? Turns out there are actual skin benefits that come from the beer, but that’s just a nice side benefit of doing something awesome. So, we partnered with our friends at Old Milwaukee, purveyors of a quality domestic lager enjoyed by hard-working Americans since 1849. The result is a Big Ass Beer Soap that suds up well, gets you clean, and smells outstanding. (It doesn’t smell like beer. It has a woodsy, sandalwood scent that smells like a man should.)