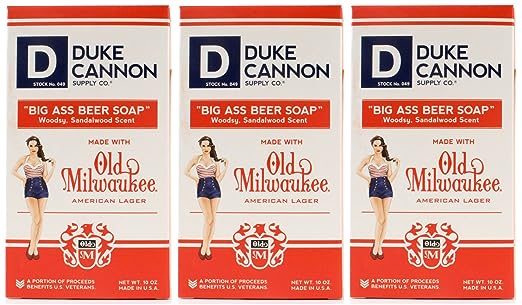 One day while sipping a refreshing shower beer, Duke Cannon got the idea: what if we put beer in the soap? Turns out there are actual skin benefits that come from the beer, but that’s just a nice side benefit of doing something awesome. So, we partnered with our friends at Old Milwaukee, purveyors of a quality domestic lager enjoyed by hard-working Americans since 1849. The result is a Big Ass Beer Soap that suds up well, gets you clean, and smells outstanding. // In Duke cannon’s day, a man did’t put strawberries of pumpkin spice in his beer. You never had to sniff your beer, and you didn’t worry about pairing your beer with anything other than a hot dog. A “tasting flight” considered simply of a six-pack of quality American lager purchased at your local liqueur store. Duke Cannon drinks and showers with Old Milwaukee Beer built right. Suds up well and gets you clean with a Woodsy, Sandalwood scent. //The shape and size of Duke Cannon’s Big Ass Brick was inspired by the rough cut, “brick” style of soap issued to G.I.’s during the Korean War. It is produced in the same U.S. Based, family-owned plant that was the sole supplier to the military during that era. // Our soaps are designed to meet the high standards of hard working men who want to get clean & smell good without using feminine shower gels and accessories. // A Portion of Proceeds Benefits U.S. Veterans. // Our products are never tested on animals, just bad interns. Made in the USA.